Why he was alone in the men’s room when he usually wees in the ladies’ one is a story for another day. One which includes “power struggle” as the predominant theme.

Actually, I think all he heard was “please lock the door to test your mother” when he committed the crime. And, I was adamant that he was going to “pay”.

Until I looked to my left and saw his 7 year old bodyguard with her arms folded, staring me down. They were united by a common enemy. Their army was looking strong.

I quickly tried to think back to The Art of War, to figure out my strategy while the men in blue overalls tried to knock the door down to rescue the felon. But, I drew a blank.

I was just frustrated and exhausted. It was a crap day at Mama (Pty) Limited.

As I turned into the parking lot of their favourite restaurant, I saw my daughter in my rearview mirror “Ha Ha Ha! Shhhhh, she’s forgotten…” she laughed pointing forward towards my head. (I had threatened to go straight home after the fiasco but the lord knows that I needed the wine, so I played along and pretended I had forgotten my threat.)

That’s when I remembered The Art of War’s best quote “Appear weak when you are strong”. So, like a boss, I marched into the sushi spot and proceeded to use their pocket money to pay for the sushi (and wine).

Aluta continua, as they say.  All is indeed considered FAIR in love and in war. 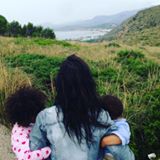 P.S. Here are some more quotes from The Art of War by Sun Tzu.

Yes, I agree, many of them do apply to my little war too 🙂  Shhhh….

Writing comes easy to me. I started writing when I was 9. I wrote a poem about a Tiger. I got 0. Yes, zero! I had never gotten zero before. The teacher cited “copying”. She decided that my poem was so damn good, that I could only have copied it. That moment changed my life. Welcome to A Heart Full of Stories! I have a BIG heart and there are plenty stories to share. View all posts by Lee-Ann Mayimele, Chief Storyteller

Read all blogs by Lee Mayimele